The bakery is running now. We do take orders and there are some goodies displayed in our Gelato Italiano store at Ahmed AlJaber Street. Check them out ;)
Last week I had an order for a baby shower cake and cupcakes tower.
It was a pleasure to make them. My staff and I had a lot of fun working on them.
For orders plz call in advance 96092181 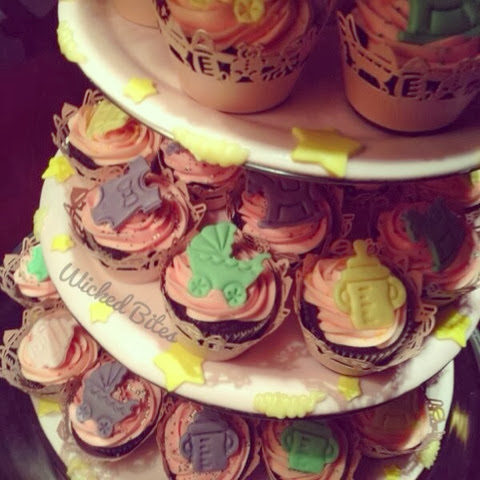 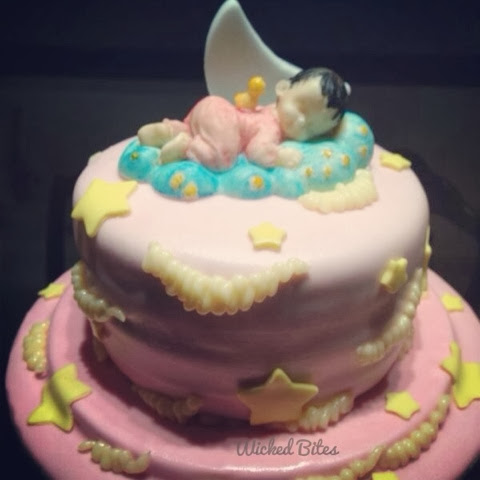 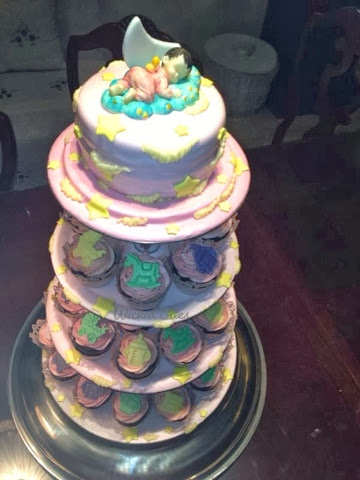 For awhile I've been craving pancakes. On Instagram I'm following @stacks_q8 and their pancake pictures are so mouthwatering. Since I promised the boys for some pancake over the weekend I decided to take them to Stacks.
Their place is in Bnaid AlGar overlooking Istqlal St. on a corner. It isn't big but very cozy. Luckily there were only us there. You know how rowdy the boys can be sometimes, and they tend to stand out in small spaces :D
Since it was only us the service was quick. We ordered the Nutella pancake and the Banana Flan pancake.
I'm going to keep it as short as possible... They were the best pancakes I ever had! Very very delicious!!!
Their pancakes are very light. They taste so good, and you don't feel stuffed after that. I loved it! And I want to go again to try their other pancakes.

- Posted using BlogPress from my iPhone

Yep! Last Saturday marked the beginning of another decade in my life.
I was surprised by my Hubby, boys and the staff at the bakery with a gorgeous cake. Wonderful gifts from Hubby and the boys.
My only wish is for God to give me health and strength to see my boys grown into Healthy and Happy Gentlemen and Successful in their lives.

Gorgeous details all made in butter cream.

The inside is rich and decadent.

- Posted using BlogPress from my iPhone

A couple of weeks back I met with a couple of friends @justnoon and @nouradrenalin @pickleskwt for lunch.
I was very hungry and I get dizzy when I think about their short rib burger.
We reached there and ordered. I had the short rib of course and the classic Poutines. @nouradrenalin had the portobello burger and salad, can't remember the name. @justnoon had mushroom Poutines and Caesar salad. We ordered fried bread and butter pickles.
Honestly I was so hungry I didn't pay much attention to the conversation going on with my friends.
The food was really good. So good I was craving it again later that evening and the day after that and after. I might go there sometime this week and take the boys with me.

I highly recommend you give it a try and I hope you'll like it as much as I did.

I woke up on the third day praying may God grant me strength! For I need it. It was the day the boys are participating in a farmers market selling Lemonade and we had a lot of preparations to do before the market.

So I started my day with my green juice and a little while later my red juice and packed the juices I needed and we were out of the house! I've realized I'm very partial to every # 2 juices. I like them very much! It says on the bottle 'Refresh your Senses' and they are very very refreshing!

I must confess though, I was obliged to try the lemonades the boys were preparing just to be sure they're following the recipes right. Since I was just taking few sips and the lemonades were sweetened with Agave nectar and honey, I hope no harm was done to my juice cleansing fast.

Another of my favorite drinks is # 6. It is milky from the almonds and sweet from the dates and flavored with cinnamon and vanilla, very yummy and it fills me up by the end of the day and cuts off my hunger. I wish it was made for midday where the hunger hits the hardest.

Yes it was a long day, very exhausting trying to keep the boys focused on their tasks, but not tiring like before. I felt more energized and lighter from within and I went on until early evening. By the time I got back home I was starving but in a good way.

My sister asked me how much weight I lost. I told her I didn't know, but I felt lighter, healthier and all I think about is a plan for a healthier life style, more time at the gym and more time for myself.

Again, if you're expecting you'll lose those five kilos that wouldn't budge with this program, well maybe you will, but it isn't the right way to take a first step for a healthier you. I know we all know what works best for us. That is my opinion and what works for me.
Will I do this program again? Yes definitely! However next time i'll plan it in advance and do it when my life is less crazy.

I know I must start my 4th day with light meals but I promised the boys for some pancakes. I promise I will find a light option on the menu if not have something to drink and have porridge when I get back home.

I always wake in the morning full of energy. I had my first juice and went on my daily work buzzing around here and there like a buzzy bee. I was really worried that I might start feeling tired and I had so much to do, but I felt good, really good in fact, just a bit hungry for solid food, and I felt a vibrancy to me. Even my skin felt different.
I really loved the second juice pineapple with ginger, very fresh and light. I was sipping it and didn't want it to finish.

It was later in the afternoon when I started feeling tired, but not as tired as the first day when all I wanted to do is sleep.
I relaxed sipping the rest of my juices and enjoyed my TV shows.

My friends were asking me how much weight did I lose? Honestly I didn't weigh myself.
The idea of the whole program isn't about losing weight but cleaning up your system, and jump start your body to a healthier life style. I just hope I'll stick to the healthy life style I have in mind. :)

Following news and hearing about celebrities going on juicing diet made me wish we had such companies here in Kuwait.
Not that I can't do it at home, but I'm too lazy to go through the whole process of juicing veggies and greens.
I bet all of you have heard about Re Kuwait by now. I was following Re Kuwait on Instagram and waiting for it to start its production. Like a giddy child in a candy store I called and signed up for a 3 day juicing program.

The day came when I first got the call and the idea of the program was explained to me.
It isn't a fad diet. It isn't a diet where you'll expect to be dropping kilos.
No... It is a program which helps give your digestive system a break and flushing out toxins from your body. Then you can start with a healthier life style.
The juices were brought to me the night before I started my diet with a booklet explaining further about the juicing program.

Now! My first day! First I have picked one of the most stressful weeks to start a juicing fast. I'm stressing about Abdulaziz's exams, and then he will be participating in a farmers market and I'm trying to get his gear ready for it.
I started my day with the Green juice. A mix of greens and fruits. Not bad a bit spicy. I sipped from it until I was done... Now what? Half hour later my body wanted something solid and filling. I occupied myself but then I started feeling sluggish and I took a nap.
I woke up when it was time for me to pick Ahmed from school. I had a killer headache and a short temper, snapping at poor Karam.
At lunch time I was having my third juice, and all I wanted was to get back in bed. Fahad went on full panic mode. He isn't used to see me looking tired. My darling diet saboteur suggested I should try some veggies from the stew. I held on to my resolve, "I can do it!!!" But get me into bed first!
After my second nap of the day I felt more refreshed, just a tiny bit cranky, but good to go. Well I think I'll strangle Abdulaziz first, but I'm good.

The boys were soo psyched when I asked them who wants to change into a vampire? They have to take few sips from this special juice. It was hilarious!

The juices are good, light not heavy like the smoothie and soup diets I go on sometimes. The green juice which I was a bit wary of wasn't that bad.
All in all... I passed my first day with flying colors. Lets see how it will go with crazy tomorrow. 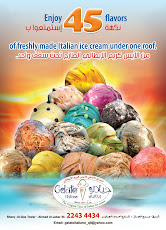